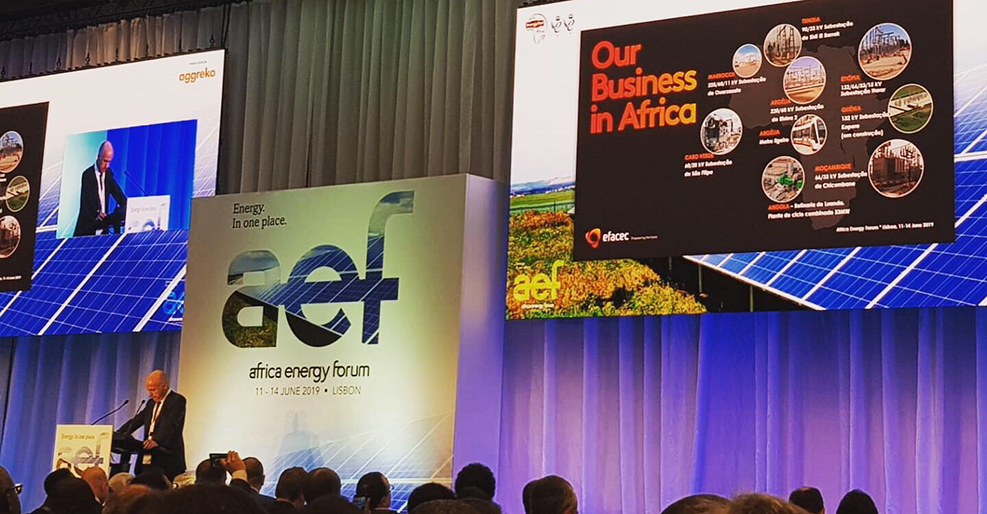 From June 11th to 14th, Lisbon plays host África Energy Forum (AEF), one of the largest meetings worldwide dedicated to the energy, infrastructure and industry sectors of the African continent, which will be held for the for the first time in Portugal. Efacec is one of the entities hosting the event, which will bring together members of the Portuguese Government and African countries, representatives of international institutions such as the World Bank, International Monetary Fund and European Union, as well as dozens of companies and initiatives related to the energy sector in Africa. More than 1,500 people are expected to attend the event during four days.

The 21st edition of the Africa Energy Forum will take place at the Lisbon Congress Center. Ângelo Ramalho, CEO of Efacec, will be in charge to welcome the attendees during the opening sessions on June 11th. This will be an opportunity to underline Efacec’s actuation worldwide and in particular in Africa, a continent where the company has been present for more than 50 years, continuing to contribute actively in the development of the projects to solve the problems of access to energy in this region.

Efacec will participate in some discussion panels of the event, especially during June 13th: David Claudino, Director of the Energy Business Unit, in the panel “The Rise of Solar in the Energy Mix”; Duarte Ferreira, Global Business Development Director, in the panel “Development and Implementation of Regional Hydro Projects and Growing Relevance of Mini Hydro”, and Miguel Vales, Strategic Marketing Director, in the panel “The Crucial Role of Multilateral Institutions in Financing Energy Access and Efficiency”.

Efacec has a historic presence in Africa. In addition to the close connection with Portuguese-speaking African Countries, Efacec intends to be a relevant actor across the continent. So, the company is currently working actively in other African markets, including Ivory Coast, Egypt, Kenya, Ethiopia, Tunisia, Algeria and Morocco. Among the priorities for future investments, Efacec identifies opportunities in electric networks of several countries in the Central, Western and Nothern regions of the continent.

Efacec had developed and participated in a wide range of projects in different points of the African continent, namely in the fields of transmission and distribution of energy, energy production, water and waste treatment and photovoltaic parks. Some of the most significant projects erected by Efacec are the construction and supply of a power transformer for the Laúca Dam (Angola); provision of SCADA and Energy Distribution Control Center for the regions of Luanda and Northern of Angola; Oran and Constantine Light Rail (Algeria); Mamba substation with 220kV capacity (Rwanda) and the Ait Massaoud Water Treatment Plant (Morocco).

With a comprehensive presence in the value chain of Energy, Mobility and Environment, Efacec acts as a solution provider, EPC contractor (Engineering, Procurement and Construction) and O&M service partner. Efacec is present in strategic markets such as Europe, the United States of America, Latin America, Asia, Middle East, Maghreb and Southern Africa.

We use cookies to ensure that we give you the best experience on our website.OkPrivacy policy
Go to Top